Joke of the week

An engineer was removing he engine parts from a motorcycle when he saw a famous heart surgeon in his shop. He went to him and said, “Look at this engine. I opened its heart, took the valves out, repaired them, and put them back. So why do I get such a small salary and you get huge sums?”

The doctor smiled at the engineer. “Try the same when the engine is running.”

The engineer smiled back and said, “I can take any dead engine and make it alive again. Can you? 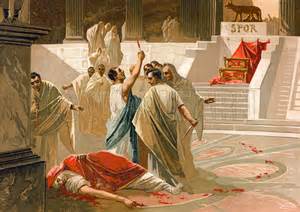 Today, March 15, is the Ides of March, the date of Julius Caesar’s assassination in 33 BC. Don’t expect this reflection of Caesar’s murder to brighten your day, though it may be the most valuable thing you read this March 15.

Throughout history great leaders have been struck down at the height of their power by enemies they did not know they had. Sometimes those enemies were relatives or erstwhile friends. Is there anything we can learn from these events? Some may conclude that you can’t trust anyone, and never give themselves to friendship lest they be played for a fool. That is not the lesson we should take away from the betrayals that led to these assassinations. Others may conclude that living a conspicuously successful life is dangerous; they those who live quiet, retiring lives are the ones who have safe lives.

I think the lesson to be learned is an old one: Man knows not his time. This is a lesson for all of us. Whether it be a fatal accident, a heart attack or stroke, or food poisoning, none of us can bank on tomorrow. This fact should make us take to heart  the Lord’s parable in Luke 12:

The Parable of the Rich Fool

13 Someone in the crowd said to him, “Teacher, tell my brother to divide the inheritance with me.” 14 But he said to him, “Man, who made me a judge or arbitrator over you?” 15 And he said to them, “Take care, and be on your guard against all covetousness, for one’s life does not consist in the abundance of his possessions.” 16 And he told them a parable, saying, “The land of a rich man produced plentifully, 17 and he thought to himself, ‘What shall I do, for I have nowhere to store my crops?’ 18 And he said, ‘I will do this: I will tear down my barns and build larger ones, and there I will store all my grain and my goods. 19 And I will say to my soul, “Soul, you have ample goods laid up for many years; relax, eat, drink, be merry.”’ 20 But God said to him, ‘Fool! This night your soul is required of you, and the things you have prepared, whose will they be?’ 21 So is the one who lays up treasure for himself and is not rich toward God.”

The Ides of March have a lesson for all of us. We need to get right with God ASAP, for man knows not his time. If you are waiting to become a Christian, you are skating on thin ice. FB message me if you don’t know what to do.

The Old Sale is Over, the New Sale Begin

The two-for-one sale on Saluda Press’s children’s books is over. Now it’s time for a sale for adults. From today till April 12 you can buy James: A Study Guide: Practical Wisdom for Challenging Times at the regular price of $9.95 plus $4.00 shipping and receive The Letters of Peter: A Study Guide: Hope and Truth for Troubled Times, regularly $11.95 plus shipping, for free. You save$15.95. Go to the top of the page to Buying My Books and follow the instructions to buy James (note: PayPal accepts your credit card). Or, buy on Amazon. Anyone who buys James will be sent Peter as well. Deals like this don’t come often (twice a year).

Luther’s 95 Theses for the 21st Century

At the time Luther issued his 95 theses he acknowledged that church authorities, the pope in particular, had the right to impose penalties on those who had committed various sins or other infractions of canon law.

The canons of the Roman Catholic Church are “the body of laws and regulations made by ecclesiastical authority, for the government of a Christian organization or church and its members.” They are “positive ecclesiastical laws, based directly or indirectly upon immutable divine law or natural law, derive formal authority in the case of universal laws from promulgation by the supreme legislator—the Supreme Pontiff [the pope]—who possesses the totality of legislative, executive, and judicial power in his person.”

Canon law allows priests and the pope to prescribe penalties for sin. Those penalties may include the penalty of purgatory after death as well as penalties in this life, such as acts of penitence, exclusion from the Mass, and even life itself. The pope can remit those penalties if he chooses to do so.

It is actually reported that there is sexual immorality among you, and of a kind that is not tolerated even among pagans, for a man has his father’s wife. And you are arrogant! Ought you not rather to mourn? Let him who has done this be removed from among you. For though absent in body, I am present in spirit; and as if present, I have already pronounced judgment on the one who did such a thing. When you are assembled in the name of the Lord Jesus and my spirit is present, with the power of our Lord Jesus, you are to deliver this man to Satan for the destruction of the flesh, so that his spirit may be saved in the day of the Lord.  1 Co. 5:1-4

When Paul speaks of delivering the offender to Satan, he specifically states that it is for the destruction of the flesh in this life in order that the man be saved for eternity. The church is to leave punishment to Satan; it is not to inflict any more punishment than exclusion from the Christian fellowship (which leaves the offender unprotected from the ravages of Satan.)

As 21st century Christians, we need to acknowledge that the church can and should exercise church discipline. A church’s failure to discipline known, grievous sin in her members is itself a serious sin. It renders the church contemptible in the eyes of the world. Jesus said:

You are the salt of the earth, but if salt has lost its taste, how shall its saltiness be restored? It is no longer good for anything except to be thrown out and trampled under people’s feet. Matthew 5:13

It is a lamentable fact that few Protestant churches practice church discipline nowadays. They may have disciplinary procedures on their books, but too often they are a dead letter. How can we expect church members to take sin seriously if its ministers and elders don’t call them to account for their open flaunting of God’s law?

Luther didn’t deny the church’s right and duty to assign penalties for transgressions of canon law, but he did deny that those penalties extended beyond death.